31 October 2020 An awesome outdoor Halloween movie night! Fun and Social Distancing! Thanks to Jon and Kyrsten as co-hosts. Pic Pic Pic Pic Pic Pic Pic Pic 24 October 2020 I'm proud to have provided sound for the NYC RuckUS 2020 Get Out the Vote Drive. Organized by my good friend Sarah Valentine, and including Laurie Anderson! 4 April 2020 The Month The Earth Stood Still. A recent Italian paper on the horrible Covid-19 outbreak in Italy references my 20yo work on Bi-Logistic Growth and LogletLab (with my fantastic collaborators J. Ausubel and J. Yung at PHE (Rockefeller University). I hope the curve is flattening, and there is a vaccine soon. 25 October 2018 Perrin is honored to have played a small part in the amazing new Doug Hall sound art piece "Wittgenstein's Garden", which recently opened (finally...) at the stunning Oliver Ranch. Sound designers Jim McKee and Jeremiah Moore did an extrodinary nuanced job recording the SF Girls Chorus and then creating an outdoor spatialized mix. I believe it will be the new standard for which sound art pieces are critiqued. Leah Garchik has a nice description of the opening walkthrough. (local copy wg.pdf) 10 August 2017 A New York Times article on the Hyperloop mentions a paper I co-authored at The Rockefeller University twenty years ago... ( local ). 17 July 2017 The Tank gets written up in the New Yorker! (I'm glad I could help out with a donation of speakers!). (local copy nytank.pdf).
November 2016 Greg Niemeyer's Tsar bell project is mentioned in Pacifc Standard.(local).

25 April 2015 Perrin is proud to be co-chair of the Kala Art Institute "Fresh & Local" Spring Gala and Auction.

8 April 2015 Sharon is performing Crazy Famous at The Marsh in SF at 7pm Wednesday 8 April!

February 2015 lunar new year meyer media love: grandma and grandpa in the The New Yorker and perrin in jweekly.(local: tny,jweekly).

13 October 2014 David Wessel, a true pioneer in electronic music, passed away unexpectedly this morning. CNMAT is planning a memorial concert for November, check the site for details.

15 August 2013 I help produce a moving living wake for Keith at Terripan Crossroads.

1 April 2013 Perrin is invited to collaborate on an art piece for the Venice Bienalle opening 1 June in Venice, Italy.

26 March 2013 Sharon performs "Second Hand Muse" at Tell It On Tuesday at the Berkeley Marsh.

8 June 2012 Bad news: Leo's Pro Audio in Oakland is going out of business after 56 years. Good News: Perrin gets a fantastic deal on an awesome Fender bass. (fretless) no less. Now its time to take some lessons and then rock out at burning man...

16 May 2012 Perrin's mentors are Dot Earth'd in the New York Times. IIASA. You have not heard of it, but you will.

12 April 2012 Perrin is co-author on a paper that gets cited in a new paper in the New England Journal Of Medicine.. I created the original figure 4. NEJM redrew it for some reason, I think mine looked better.

11 January 2012 An accurate snapshot of my friend Reuben's father.

3 December 2011 Nadia decides to come early(!). Amazing ordeal, but all are healthy now.

27 September 2011 Sharon is performing Second-Hand Muse at the Marsh Berkeley.

30 August 2011 Check out Perrin, John H. and Jesse U.'s rocking dome at Burning Man 2011. Many thanks to SteveDood for loaning us his awesome wooden dome.

16 August 2011 Perrin deletes his Facebook, Link'ed In, and Twitter accounts. If you can't figure out how to send me an email or call me, I don't want to know you :-). The New Yorker agrees.

March-July 2011 http://www.are-we-there-yet.org/? (Perrin is helping with a cool exhibit at the Contemporary Jewish Museum). And we get some BoingBoing Love. The Artist's opening was a blast. more love. meyer love. ProAV love.

25 April 2010 Sharon is quoted in a Buffalo Evening News article about the Buffalo witchcraft trial.

14 April 2010 Sharon performs an excerpt of Second-Hand Muse at The Marsh in SF.

24 Feb 2010 CERN also reports on the Rhythms of the Universe project.

29 Jan 2010 A cool project Perrin is working on gets slashdotted.

Pictures of our June 2007 trip to Denali National Park, Alaska.

Some Pictures from Christmas 2001 in Hartford, CT.

Pictures from October 1998 (Our wedding, our honeymoon in Spain, action shots of our cats...).

A short bio, suitable for attribution. 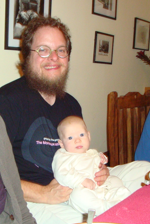 My main work is at Meyer Sound. I perform research in all areas of computational acoustics. I am investigating innovative algorithms for multi-channel audio processing. I am also involved in research to improve our ability to model the complete physical behavior of loudspeakers.

In the Spring of 2009 Meyer Sound launched a new Audio Processing Platform " D·Mítri" named after our son Dmitri. I don't know why the product name has an acute accent over the "i". The period between the "D" and "M" makes sense. Digital. This naming follows a Meyer Sound tradition. The MILO loudspeaker is named after my sister Tara's son Milo, and the M'elodie is named after her daughter Elodie. UPM stands for "Ultra Perrin Meyer", and the reason behind the naming is a great story. If you meet me I will be sure to tell you. If I forget to tell you, please remind me. The MTS4A, an under-appreciated loudspeaker, was named after my sister Tara. The HM-1, sadly discontinued, is "Helen Meyer." Thankfully my mom is not discontinued, and continues to be the backbone behind the business and sales strength of Meyer Sound. MICA is a made up name, from a contest at a trade show a while ago. Both D·Mítri and M'elodie started a fun new tradition at Meyer - confusing our ERP system with interesting characters in the official names of products (yes, the apostrophe is an official part of the M'elodie name.) I have not dared to ask how our documentation department handled the dot between the "D" and "M" and the accute accent over the "i". Our future ERP system will handle Unicode characters. Thus, our marketing department can branch out into Arabic, Hebrew, Chinese, Cyrillic, or even Tifinagh (Berber) letters in product names. As of Unicode 5.1, unsupported alphabets include Egyptian Hieroglyphs, so of course my vote for our next product name is

Currently I work (very) part-time for the Program for the Human Environment at The Rockefeller University as a research assistant. I am working on a javascript version of Loglet Lab. I hope to complete this before the dawn of the "Web 5.0 Bio-Electrical-Swarm" era, because at that point I would have to design genetically modified llamas to fit loglets, and llamas historically favor Gompertz S-curves.

I am a graduate of the Courant Institute of Mathematical Sciences at New York University. I have a Master's degree in scientific computing, my thesis was titled "Axisymmetric Acoustic Scattering by Interpolation." The research was published in 2006 in the journal Communications in Computational Physics "On the naturally induced sources for obstacle scattering." (local)(jcp draft). Therefore, I have an Erdos number of 5. Yu Chen was an excellent advisor - tough yet patient. Here is a wordle summary of the research.

I entered the Columbia College Class of '92 as a freshman, studying east asian languages and physics. I switched to SEAS in my (extended) junior year, and graduated in 1993 with a B.S. in Applied Physics. My undergraduate thesis was "The Fractal Dimension of Music." I was inspired by a fascinating professor in the department (John Helm), who taught a seminar on Baysian statistics. John introduced me to Jesse Ausubel, who is one of the most interesting and innovative environmental scientists around. He introduced me to the little-known but amazing research group IIASA in Vienna, where I met and worked with researchers including Cesare Marchetti, Nebojsa Nakicenovic, and Arnulf Gruebler, among many others.

I am a proud graduate of Berkeley High School (class of 1988).

What inspired me to learn math:

javascript (takes a couple of seconds to compute) [1]

Check out my new website to learn about my upcoming plays:

My play, Spacegrrls, was performed for three weeks in April 2001 at The Greenwich Street Theater in New York.

Some pictures from March 1998, including Perrin, Sharon, Ruth, Dave, Murphy, and Loglet.

Pictures of our cat, Murphy.

The Meyers at Thanksgiving 1997

PICTURES of our Swiss Party, Nov 1997.. We will sort them someday.

A gallery of pictures our friends. .

Here are some pictures of a 35 pound(!) Stripped Bass our boat caught of off Martha's Vineyard in October 1997.

[1] you need a browser that supports HTML 5 and the canvas tag, i.e. firefox or safari. Microsoft IE 8 might work someday.

The real truth about Rick Santorum.

Send a secret message to your friends. Fuck the NSA!